﻿
﻿﻿﻿﻿Meet my Grammie.﻿
There is a reason I am so enamoured of Joanie Holloway Harris here, of Mad Men.  It is in large part that she reminds me of my Grammie.  I feel a deep dark love hate and sorrowful yearning for both these woman.  Grammie died a few years ago.  Crazed and alone, save for our little immediate family.  And yet, there was a time, when she was the Norma Desmond of her world.  And anyone who had the good fortune of entering into it.

I am pasting some old writing I did about Grammie here.  Those portions will be indented, written by me around 2004, and I was really angry with her.  She didn't approve of me getting sober.  She just didn't understand it and gave me a hard time about it.  My perspective about her today is so different than it was almost a decade ago.

﻿
﻿I have her on my heart right now as NOBODY loved Christmas more than Grammie.  She could forget all the terrible facts of reality, largely due to her creating them, and focus on love and abundance.  Her two favorite things.

There is no easy, understandable way to describe or understand why my Grammie is the way she is. No more than trying to explain why I am or why you are the way you are, however, the impact of her behavior on the people she loves, well, the only people left in her life after a lifetime of loving and pushing away are my immediate family. She was married and divorced four times, twice to the same man, my grandfather, my dad’s dad.

My Grammie was as selfish as they come, some of which I know I have in me. She should never have had a child because she was a lonely lost child herself and never could care ultimately about anyone but herself. The reason she would make a “friend” or a lover was strictly about what she could get from them for herself. She was gorgeous, have I mentioned that? 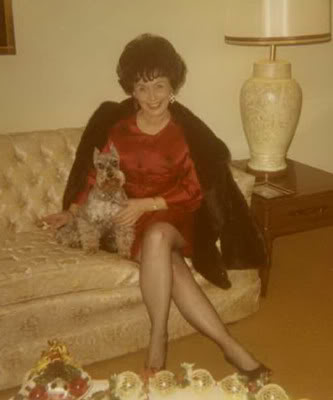 An absolute beauty – movie star quality - some said Elizabeth Taylor-esque - and men flocked to her. She loved it - loved the attention and the devotion. She grew to expect that devotion and attention from every person in her life. Especially her son. But she left him when he was a small child to move and pursue her own interests. She left him with various relatives and abusive men who hoped to be in her favor. My dad was the only child she ever had and she really wanted him to be a girl. She used to curl his hair and put blush on his cheeks. Although he made a pretty girl, he made an even more handsome boy and grew up relatively unaffected by his unusual childhood.

﻿
﻿Grammie, for a period of time, lived by herself in a condo on Lakeshore Drive in Chicago.  The Pink Building.  You know it.  And she was a manicurist to the stars, including Frank Sinatra.  Who, let's just say was charmed by her and vice versa.  All while she had a child in the world, who was passed along to relatives to take care of while she lived the high life.  She wanted a son only when it was convenient for her and when it served her purposes.

I don’t know if she ever truly loved, but boy did she lose. She pushed so hard and asked for so much that everyone she had eventually left her. Now she is alone and only my dad and mom go and visit her.


That was again, in 2003 or 2004.  She was living in a nursing home close to my parents, and was completely out of her mind.  She was ALWAYS delusional.  From the time I remember as a child she brought fun and fantasy and luxury with her.  When Grammie came to visit, it was always a good time.  She and I would go shopping and to lunch and do our nails and she would encourage me to wear make up and dress up at all times.  AT ALL TIMES.  And if I didn't look up to snuff she made sure she let me know.  I can only imagine the hell my dad went through with that superficial bullshit as a child.


She lost everything. Most of all her beauty and this is what I understand. That is where all this sadness and loss of control for her begins. She lost her beauty, which means she lost the adoration of thousands and then she slowly lost her own money trying to hold on to it and get it all back. Now she is just lonely and sad and mean. She doesn’t want me to succeed and be happy because she is not.

Do I fear losing my looks? You bet I do. I don’t underestimate for one minute how much the way I look has helped me in my life. I know I am smart and capable and all of that other crap, but I am beautiful and in this world of ours, that is what really matters. You may think me superficial, but it is a tool, just like money that can be used to get what I want and she knows this. She knows (or thinks she does) that once I lose my beauty I will have nothing just like her. But that is where she is wrong. I do have more than her because I take the time to invest in myself and in other people. I don’t make friends because of what I can get from them.


Since I have been sober, I have learned the hard way that friends and family are the most important and enduring relationships I have and without them, I have nothing. I don’t have to be beautiful on the outside to be fulfilled on the inside. Does it help? Sure, am I going to fade quietly into non-prettiness? No way, I like being pretty. It is fun and it is what came naturally to me. I don’t abuse as I used to though. And it is not all I have.

I hate my Grammie. As much as I feel that hatred for her I feel love and sadness and understanding for her more than anyone else could imagine. The reason for this is that she and I are so much alike. Or we used to be. Our relationship has changed forever since I got sober and learned how important people’s insides are. She never learned that lesson and now, I don’t think she ever will. She used to love being with me because we were two gorgeous ladies against the world. We could both wield our feminine wiles and the men would flock. Well, I don’t work like that anymore and she doesn’t like it one bit.
﻿

I don’t hate my Grammie. I hope that before she dies she finds some kind of peace and gratitude for what she has had in her life and not to just keep asking for more, more, more. Sometimes there just isn’t any more and we just need to be grateful for what we have.


She’s going to be a selfish bitch until her dying day, but at least I understand why she is that selfish bitch. I’ve learned a whole lot about young beauty and how that inevitably fades. What we are left with is what we have inside and those we have surrounded ourselves with. What a lesson you have taught me Grammie, I don’t want to go out like you. Alone and lonely because of pushing people away. Thank you for showing me that.

Interesting how perspective changes after years go by. Now, I really only remember the good stuff. The fun Grammie stuff and not the abusive way she talked to my dad and then to me. I am not mortified as I used to be when she got arrested when I was just 16 and we were at a shoe store and I had to call my dad to bail her out for shoplifting.
I feel so much compassion for her today. She was so lonely and filled with longing. Talk about a hole in the soul. She depended on men and their attention for EVERYTHING. She relied on sex appeal and charm for everything, much like our girl Joanie Holloway. They were both so much better than that. Partly due to the times, and partly due to low self esteem, these women relied on men for everything.

If Grammie only knew how valuable she was in teaching me these great lessons, completely different lessons than she meant to teach me, she would probably be horrified and say, "no no no, that's not what I meant!". I watched and I learned Grammie. I learned what not to do and what to do as a smart and capable woman. You taught me to love and appreciate luxury and beauty. And I miss you right now at Christmas. Terribly, actually.
Posted by Kitkatkootie at 11:55 AM