He's a boy.  His name is Sally.  Sally Lou Kitty, or Sally Boy or Sayee as we pronounce it.
He is a total goof.  He is super sweet, but love bites and licks.  It's his thing.  He runs around and cries like a baby, LOUDLY, when he has to poop.  I will never forget the first time my now husband was at my place when we started dating and he met the cats for the first time.  I heard Sally running around crying all loud and I just started laughing, and said, "It's what he does when he has to poop.  It's the poopin' cry."  Chris just laughed and laughed.  I knew he was good.  Sally's like the ambassador of cats.  He is way more like a dog than a cat.  I don't think he knows he is a cat.  Even people who don't like cats usually like him.   He's got some issues.  Who doesn't?

I got sober in October of 2001.  I lived in rehab and a women's halfway house for 6 months after that, so around July of 2002, I returned to Chicago.  No job and just trying to stay sober, I spent my time outside in the backyard reading and going to meetings.

One afternoon an orange tabby came into the yard and unlike most stray cats in the area, he came right up to me meowing.  LOUDLY.  Not only that, he jumped right into my lap and started drinking my iced tea! 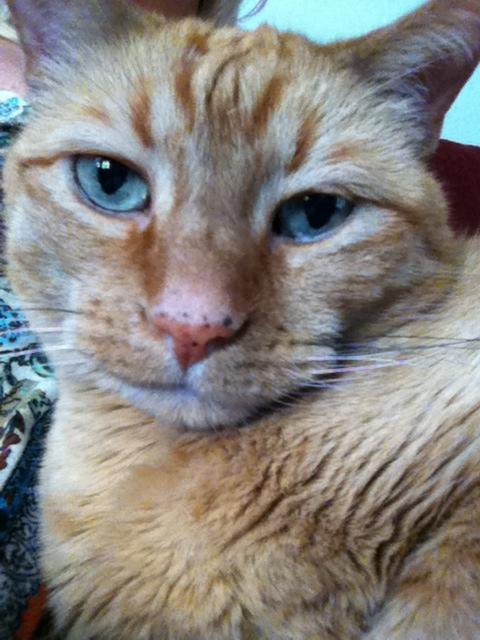 Here's the thing.  Where I was living at the time, we already had three cats.  My lovely Eliza Jane Doolittle being one: 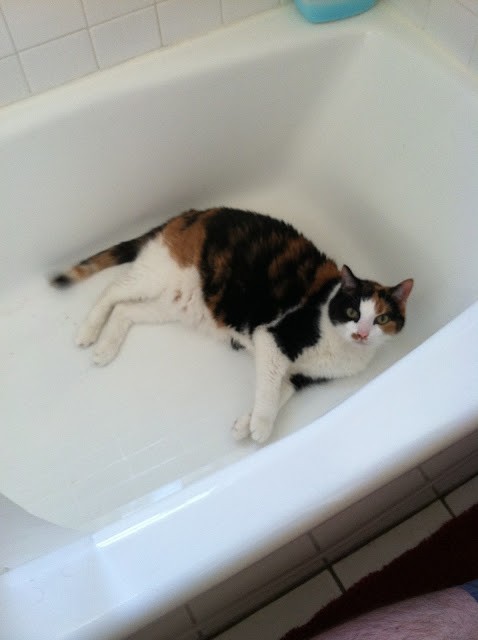 So, day after day this orange cat would wander into the yard and sit on my lap and read with me.  I wandered around the neighborhood asking if this was anyone's cat.  I put up signs.  He looked super healthy and talked so damn much, I knew he had a lot to tell me.  But he also seemed so friendly, that I thought for sure someone had to be missing him.  I fed and watered him and he just kept coming back.

One day though, everything changed.  He showed up, jumped in my lap and I was petting him only to find a penny sized hole in his chest.  It was shocking!  I cleaned him up and put an ace bandage around his chest and we were done for the day.  I sincerely kept thinking he had to be someone's cat.  The next day he came back and the bandage was all askew and the hole was there, gaping, looking at me.  If I didn't take care of this, who knew what would happen.

I convinced the guy I was living with that we needed to take him to the vet.  And as a side note, if I took him to the vet, we were taking him in.  I had looked long enough for someone to claim him and nobody did.  This was the last straw.

We went to the vet and turns out SOMEONE HAD SHOT HIM WITH A BB GUN.  My poor, loud, obnoxious, overly friendly and super needy boy had been shot.  The vet got him all patched up, put on antibiotics and sent us on our way.  He told me that I had brought him in at just the right time, as infection was setting in and had nothing been done, he would have died.

If you ever meet Sally or have met him, you know he loves to talk about being shot. He acts like he's all gangsta and shit about it. He says something like, "Dudes, I lived on the streets and I got shot. Hey dudes, did you know I got shot?" We have heard these tales over and over. I have to remind him that I was there. He is the sissiest little guy, but he apparently did live on the streets in the city and he was shot. So there you go.


My Sally Boy.  Who I thought was a girl when I took him to the vet, turned out to be a boy.  As sissy like as he is, he survived being shot by some punks I would love to get my hands on.  He came to me for help.  He found me when I was newly sober and needed him most.  To say we have a bond is silly to some, I know.  But we helped each other. 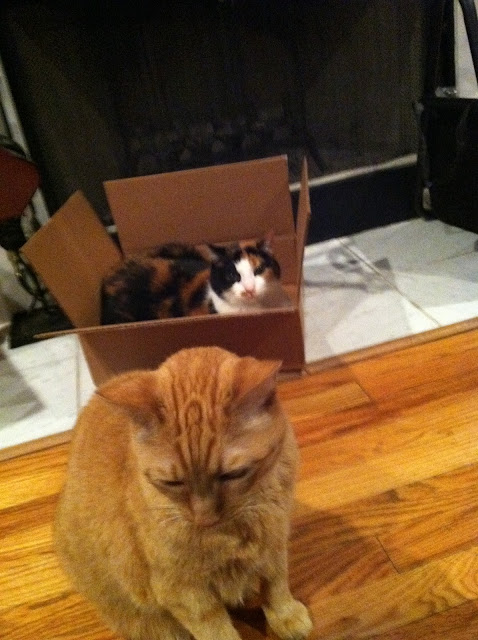 We have a happy little family today, as my dear Dumpster Husband fell for Sally and Eliza immediately.  I'm so grateful that we never had to deal with him not loving my cats.  They are his now too.  Eliza and he have a relationship that makes me jealous sometimes.  They are in LURVE.  I like to think Sally is my boy, when in all truth, he would love anybody who showed him attention.  So I live in denial.  Which is just fine with me. 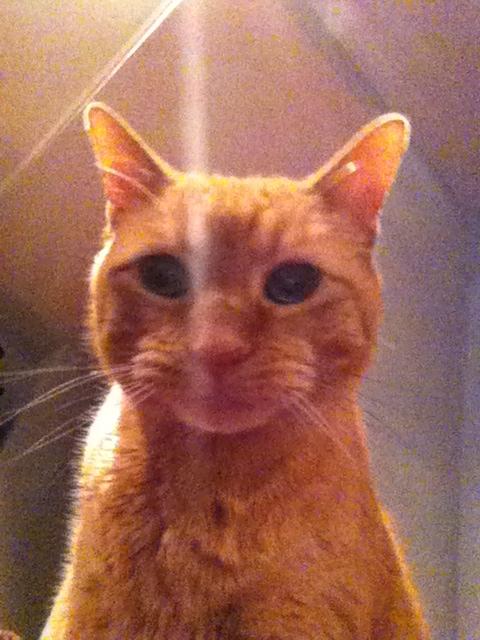 Posted by Kitkatkootie at 9:29 AM