Things I Would Rather Do Than Go to WalMart

Divers on the Facebook page are some funny motherfuckers. 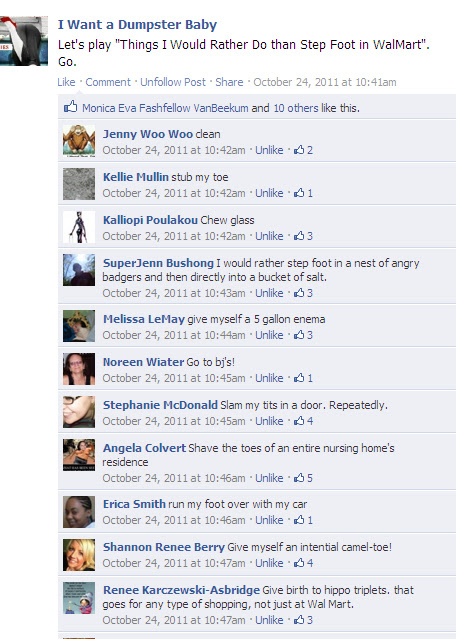 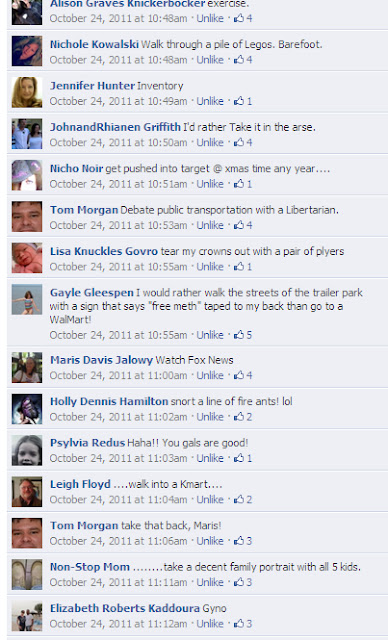 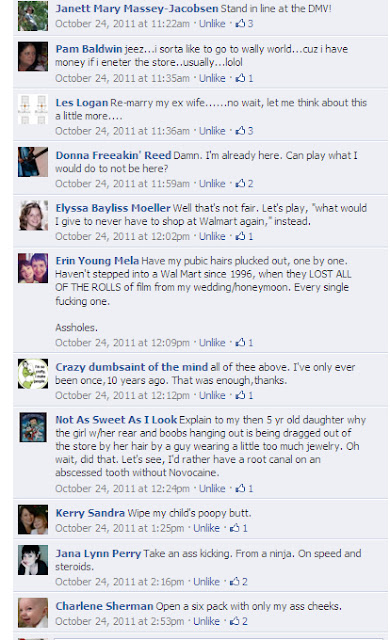 Last time DH and I went to Wal-Mart, and to be clear, I made him go after dinner one night to buy candles.  That's all I wanted.

But we walk in and it's night time and it's a horror show.
There were creepy people in every single row and there was a bird in the card aisle. Now I know there are birds in all big spaces - airports, malls, even the Tower gets birds. But we don't usually see them. This little bird was just sitting in the middle of the aisle, clearly something wrong. I think he was as mortified at WalMart as most of us are. You know that ass sniffing face that cats make, like they are just so offended that cat ass would smell like that?
﻿
﻿ ﻿﻿
﻿﻿
﻿﻿
﻿﻿﻿﻿﻿﻿﻿﻿ That above is what I imagine the inner dialogue of this little bird was.  Two nice WalMart employees came over and picked the bird up and took it outside.
The thing about WalMart that freaks me out the most, and there is a lot that freaks me out, and I am not going to feel bad about being snooty in this way.  You think about all the half dressed, poorly hygienated, stank ass, greasy mofos (adult types and childy types) in WalMart, and then think about them touching EVERY SINGLE THING IN THE STORE.  I just can't deal.  I am throwing up in my mouth just writing that.  I think of cheeto/chickenwing fingers and blue mouths and just get skeeved.

Now, I am not a germaphobe.  I believe in washing my hands, a lot, and I am not one for touching things if I don't have to, but there are sites like People of WalMart for a reason.  Because terrifying people go there.  I understand it's cheap, and you have families to feed and clothe.  I am not judging you for your purchasing choices, and I won't get into things being made in sweat shops and all that stuff.

My brother has always been so skeeved out by second hand shops, he swears we get gingivitis just from walking into one of those places. But I'm MORE skeeved out by WalMart.  I shop at Village Thrift and the Salvation Army even on occasion.  I am no stranger to used, old stuff.  But much of that is good decent stuff rather than shoes for a $1 that have barbecue sauce all over them before they even leave the store.

There's always big fighting over whether there should be a big box store in the city, and I know, people need jobs.  I get it.  But what is it about WalMart that more so than any other store, brings out the cray cray?

In closing and before y'all yell at me about being uppity about the kinds of folks who frequent every single WalMart on the planet, I would just like to say it take A LOT to freak me out.  I accept all kinds and am quick to defend those who usually don't have a defendant.  Because I have been there.  We good?  So knock that shit talk off right now.  Read my other posts about being a homeless alcoholic and then call me snotty.

I just feel like I would rather pay to go to a haunted house this time of year than to go get the everloving shits scared outta me by some WalMartians.  For serious.
Posted by Kitkatkootie at 12:39 PM