I am an asshole.  I have to work at not being an asshole sometimes.  It's gotten so much better than it used to be, but sometimes it still seeps out, like when you fill your teeny tiny coffee mug too full and try to put the to-go top on it and coffee seeps out the side.  And then I cry.  That is my inner asshole seeping out.

The best trick I've learned since being sober is to PAUSE. 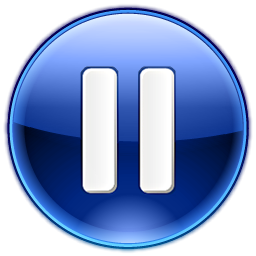 No matter how badly in my gut I want to respond in anger or in hurt or in tears or in venomous replies, I CAN PAUSE today.  I can yell and scream at an email or a fake person about what I'm angry or hurt about (because anger is usually a cover up for hurt - at least for me), but I do not have to respond immediately.

I've written about this before, and due to my fiery Irish temper, it doesn't ever truly go away.  You know in the 12 step program we have what are called Character Defects, and a big part of working a good program is to get rid of these defects.  But the funny thing is, they are some of our favorite things.  I love my anger.  I love my passion.  I love my fight for the underdog no matter the cost and I don't want to apologize for that.

But what I don't love is drama and hurt and constant wondering what is going to happen next because of something stupid that I did or said that I know I will regret almost immediately.

How often do I respond in anger or hurt and regret it?  Almost every damn time.  How often do I pause and reflect and bounce things off other people and NOT respond in anger and hurt and regret it?  NEVER. IT NEVER HAPPENS.  I pick my battles, make no mistake.  When there is something to fight, I will fight it, just not in the gut reaction way I used to.

The good news is, I don't do that shit nearly as much as I used to.  And my life is better because of it.

People who constantly have drama in their lives, unfortunately fail to realize that at least some of that drama is their own damn fault.  I used to say, "I hate drama so much!  I don't want drama in my life!"  But then I would turn around and say something that I KNEW DAMN WELL would cause a reaction from someone.  And the cycle continues.

After I got sober, I thought my life would be so boring that I created my own drama.  Boy did I.  These days, I try so very hard to have an HONEST, normal, quiet, happy, joyous and free existence.  And most of the time, that is exactly what I have.  I don't have to worry what the next email or phone call with be and I can look people in the eyes and take responsibility for my part in things.

THAT IS A MIRACLE.

I had to apologize to a friend today because I was an asshole and reacted and took something out on her very inappropriately.  It's not right and it's not fair.  And the best part is I can apologize, and she has a choice of saying, "it's OK" or "screw you, you are an asshole."  Luckily for me, she was fine.  And I cried.  But what else is new?

I cannot control other people, or what they say and do to me, BUT I do find that if I am in control of my side of the street, life seems to go a lot more smoothly.  And that is something I never ever thought I would be able to say - that I love this truly drama free life of mine today.  Just like anything worth keeping, though, I must be vigilant.  My inner asshole is just waiting for me to let her jump into action.
Posted by Kitkatkootie at 1:05 PM