It's Easy to be Awful 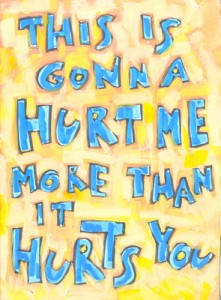 It is incredibly easy to be a hateful bitch.  It's so much harder to be kind and forgiving and compassionate. My go to emotion is often anger, but then it's not anger, it's usually hurt and fear and it manifests itself in anger.  When I step back and identify what I'm feeling 9 times out of 10 that's what it is and I can respond more appropriately.

Then THIS happened this morning, and I shared on the Facebook page:


Co-worker in the kitchen: "So, what show is your Husband directing these days?"
Me: "It's called the Theatre of Making a Baby, and it's all VERY dramatic."
Co-worker: "ok, well good luck with that." EXITS. And scene.

The Underachieving Domestic Goddess, who has become a dear friend online and writes a great blog, said "You just wear your heart on your sleeve..there is nothing wrong about living out loud - you just have to do it knowing people aren't always going to know what to say or how to react as cool as a cucumber like you! Not everyone has that grace!"

Honestly, I don't know how else to do this anymore.  I can't NOT be honest to what is going on.   And yet, some situations demand that I be more careful and respectful of other people's comfort level.  I am only responsible for what comes out of my mouth, but I don't really want to alienate everyone else.  Some people yes, but not everyone.  *Wink*

When I lash out at someone, it's because I didn't stop and think and identify.   I do this still, a lot.  I am way better than I used to be, but damn, it's still there.  I am a hot blooded Irish woman and my temper is right there, all the time.  If I can get a handle on what I'm feeling, I can do better.  It's self preservation to be venomous and bitter and hateful when I feel threatened.  It's also humor and sarcasm and snark.  I use it constantly, and honestly, it's helped me to survive.  I have no plans of giving it up, but I have to be mindful of what's really going on.  It's covering the deeper shit that for me, can't be covered. 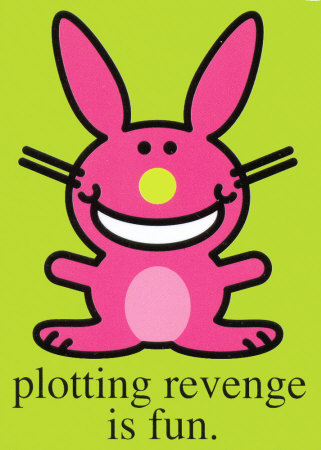 What does revenge do?  It keeps the cycle going.  I can't afford that luxury.  I can't afford to be hateful and resentful and bitter and angry.  That shit will cause me to drink.  Maybe not today and maybe not even next week, but if I hold onto that, I will drink.  Because that is WHAT I DO.  I drink.  To numb feelings and to escape my reality.

This is the ongoing challenge for the rest of my fucking life.  One day at a time, no matter what, I have to be responsible for my feelings and not drink because of them.  This is hard work.  This is going to be tested over and over and over and I'm going to fail.  MISERABLY.  But then, that is what apologies and amends and forgiveness are for.

This working on yourself bullshit is just that sometimes.  BULLSHIT.  But I would so much rather this than the alternative of never feeling anything.

I have thoughts of revenge and dream of someone getting what I think they "deserve".  I have delicious moment of revenge filled fantasies.  But that is not my call.  Who the hell am I to say what someone deserves?  I deserve to be miserable and unhappy and drunk. If life were fair, I would be dead.

I acted abominably when I was using.  I hurt everyone around me continually with no regard for their feelings and what I was doing to them.  NONE.  Today, I try to pay that all back by trying to do better, to BE better.

I don't WANT to work on myself all the time.  I don't.  But I have to.  It's part of the deal I made when I got sober that I would do whatever it takes to stay sober.  So, I begrudgingly fight the good fight and try harder.  That includes failing.  Fail every day and often!  That should be my motto.  It's the picking myself up and taking responsibility for my actions that get me back on the right path.

This life I've been given is a gift. I hear myself sometimes and I want to spank my own face for how cheesy it all sounds.  But then I remember, you know what?  This shit is deadly serious.  I won't apologize for taking it seriously.   I was given a second chance, and I don't ever take that granted.  Not for one second.
Posted by Kitkatkootie at 10:23 AM