This is a Love Story.
And it's a little sappy, just fair warning.  I know, I'm shocked as well.

It started as a college romance.  Chris and I were in theatre school together and met doing a show.  I attacked - I mean pursued - him and wouldn't let him get away.  Only problem was I was in a relationship with someone at the time.  Chris said "no way, not until you break up with that guy".  The next day I said, "OK that's done, now what?"

We had the kind of intense love that 20 and 21 year olds do.  This was a note I left on his car back in 1995.  That HE kept.  I liked owls from way back.  Little nicknames (and "a owl" sounds cuter than "an owl") left in the same handwriting I have now freaks me out and also makes me smile.  It resides on our refrigerator now. 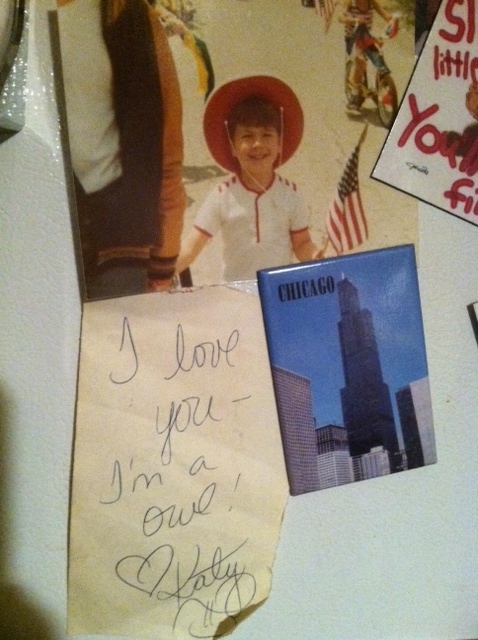 Also, a Christopher when he was young is about the cutest thing ever.  You know how when you look at the man in your life and can just see the little boy?  Is there anything sweeter?  Chris has a childlike excitement for life and nostalgia that has completely infected me.  I am not sentimental or nostalgic really (partly due to the fact that I can't remember anything) but I am with him because he lets me be.

My family went to Cape Cod every year for a few weeks.  And Chris came with us that year.  My family has long referred to that trip as the WORST.  To say Chris and my dad didn't get along, well, that's too simple.  There was a power struggle and my dad didn't handle it well.  Chris was an asshole on that trip and so was my dad and I was completely stuck in the middle.  It was awful.

After a year long relationship, we broke up in 1996.  I am a year older and graduated and was working as a singing server during the day and acting in the city at night while Chris was still at school.  I got extremely jealous and couldn't handle it.  I became obsessed and made him miserable with my behavior.  He in turn made me miserable and acted out as 21 year olds will do.  ﻿I will spare all the gross details, but it ended very badly.

Chris and I both went on about our lives and didn't have any contact.  Whenever I thought of him, I was crushed and angry.  It was the relationship that had the most impact in my life.

The quick version is I got married, became a drunk, got divorced, lost jobs, got evicted, got sober and got into other relationships and then ran outta that last relationship at the end of 2006.  Literally, ran out of the house and got my own place and was single for the first time pretty much ever.

Chris was in relationships and even engaged at one point. He did his own version of growing up and battling some demons.

I knew I needed to be on my own and date. Which terrified me. Nothing has scared me more than "dating".

What does one do when one doesn't go to bars to meet guys?  Why online dating of course.  So, it's 2007 and I joined Match.com.  And I was super proud of my profile and paid my $100. for a year membership and all that business.  And actually met a couple nice guys and went on a couple dates.  And it didn't kill me.  It almost did though.
Then one Friday in March of 2007 I was sitting right where I am at this moment.  At my desk at work looking at my computer when an email comes in to my work email address from Chris.  ﻿I'm getting anxious just thinking about it.  I broke out in a sweat.  I got jumpy and nervous and excited and terrified all at once.
The email was basically this, "hey this is going to sound weird, but I was on a MSN web page and they have a "look who's new on Match.com" ad and your picture was on there and it made me want to see how you were doing".
I remember looking at my boss who was in that day (rare for a Friday) and projectile vomiting on him.  I can't say whether that really happened, the projectile vomiting part, but that's how I remember it.
I went outside to smoke as I would do at that time, and thought about how to respond.  Came back inside and basically went Super-Awkward-Aggressive-Tryingtoplayitcool Girl on his ass.  I mean, we must have exchanged 20 emails that first day.  And it was wonderful.  It was as if our best versions of ourselves met up years after our immature versions were all grown up and we could handle it now.
He didn't even flinch when of course I over shared and told him everything.  And yet he still asked if I wanted to get dinner and catch up.  Which we did the very next day. And of course I spent the night.  Chris and I never had any problems with chemistry, it was the emotional side of things we needed growth in.  Each of us, on our own.  And after 12 years, we had both gotten that growth we so desperately needed and were able to connect on a higher plane.  And also, he was really hot.
Now, the first time we met up with my parents after all this time is another projectile vomit story as well.  But now, well, my dad thinks Chris is his BFF and they both know how good we are together and tell us quite often that they see how happy Chris makes me.  And they are absolutely right.
Needless to say, that Match.com membership bit the dust along with my payment for one year. But it worked for me now didn't it? I would even say it worked way better than for most.


We got married in May of 2009 in Las Vegas and it was perfect.  Please take a look at our finery here.


I am a lucky girl. I believe in second chances.  Not only did I get a second chance at life by getting sober, but we got a second chance at true love.  And I am so very grateful for my Christopher.  He is brilliant in many ways and in ways he is not, I am.  I actually respect him.  He is the funniest person I know.  Which I've said many times, is just about the best thing in a relationship.  He is kind and compassionate and he is on my side and I am on his.  To have that is the best feeling in the world.  Not in a million years would I have expected this to be my life.

I truly have a life beyond my wildest dreams today.  The only thing that would make it richer is a baby.  And we will get there.  Even if we don't, we have so much love in our home that we will be better than fine. We are happy.
Posted by Kitkatkootie at 1:02 PM

Email ThisBlogThis!Share to TwitterShare to FacebookShare to Pinterest
Labels: Awkward, Chicago, feelings, getting older, it's all about me, rescues, sobriety